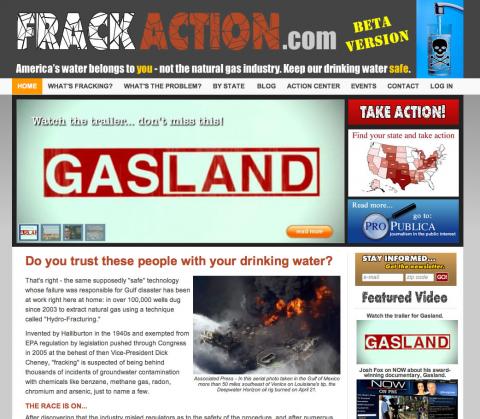 NOTE: Since the original version of this post, FrackAction has expanded greatly under the leadership of Julia Walsh. The site is now self-managed and has departed almost entirely from the foundation we first created, but after all, that's the idea, isn't it? This is a real success story and we congratulate FrackAction on the significant impact they've had on this important and timely issue.

The award-winning documentary, Gasland, has brought attention to the practice of hydraulic fracturing, or "fracking." Fracking is a method of last resort for extracting natural gas from rock layers deep inside the earth using vast amounts of water laced with toxic chemicals.

FrackAction.com is a prime example of how the combination of effective messaging, smart web strategy and "boots on the ground" using social networking can make the difference in passing needed legislation. Through the efforts of Julia Walsh and her team, FrackAction has been instrumental in getting legislation passed in New York and in Pennsylvania to take a fresh look at the technology to the end of preserving our precious natural resources.

The natural gas industry was exempted from EPA regulation by legislation pushed through Congress by then Vice-President Dick Cheney, whose former company, Halliburton, invented the procedure. Since the legislation was passed in 2005, there has been a fracking "explosion" (no pun intended) and concurrent reports of groundwater contamination throughout the US in areas where fracking is taking place.

FrackAction.com serves not only as an informational platform, but as a center for grassroots direct action throughout the US using powerful group-building functionality. In NY State alone, FrackAction served as the platform for demonstrations of hundreds across the state against the issuance of state permits until the EPA completes a full environmental assessment. At this writing, there are two bills under consideration in the state legislature that would place a moratorium on the practice - and passage is now deemed likely.